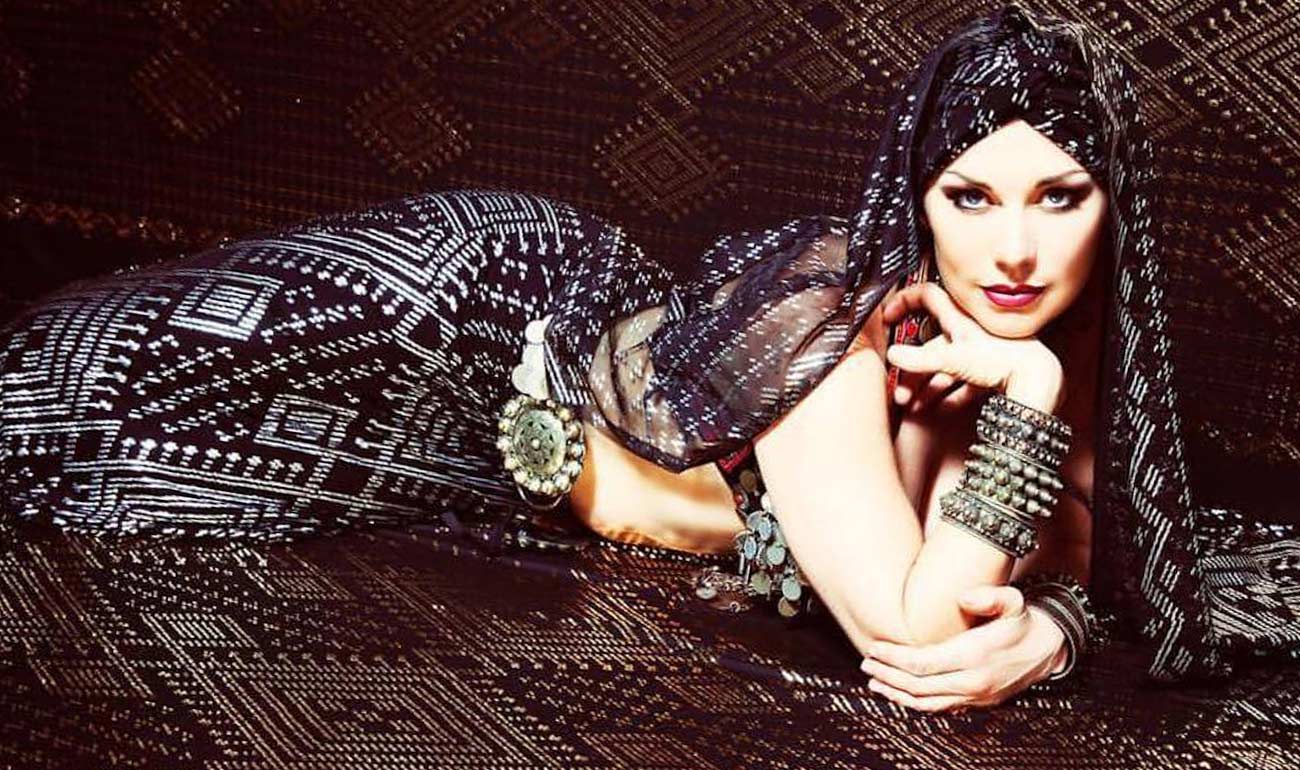 Fabrics, The Blog
by Artemisya Dancewear

The charm of Assuit fabrics

Tulle bi Telli, also known as Assuit or Assiut, is one of the most luxurious, exciting and mysterious fabrics worn by dancers since the times of Tahiya Carioca and Samia Gamal.

It takes its name from the Assuit region of Upper Egypt, where it was made. The name translates roughly as “net with metal” or “net with silver“, although in reality there is no word like “telli” in Arabic. Tulle obviously refers to the cotton mesh fabric that is used as a support, while the term “talla” in Arabic can refer to any type of silver or gold plating or coating. If used together with the word tulle it becomes bitelli tulle and literally means “plated tulle” (or even “covered tulle”).

The fabric is made up of a cotton or linen net with small strips of metal that shine like liquid metal when they move. The basic material is tulle, which is a machine-made cotton or linen fabric. Each strip has a width of approximately 1/8 inches and a length of 18 to 24 inches. 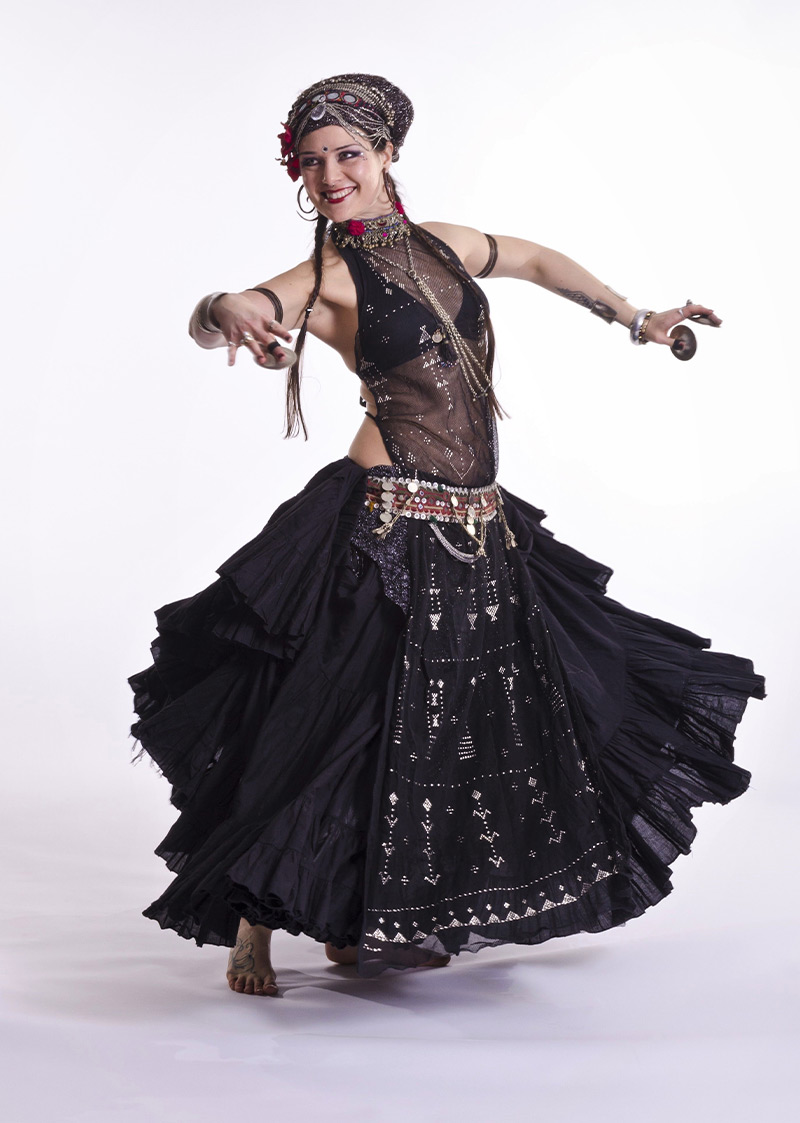 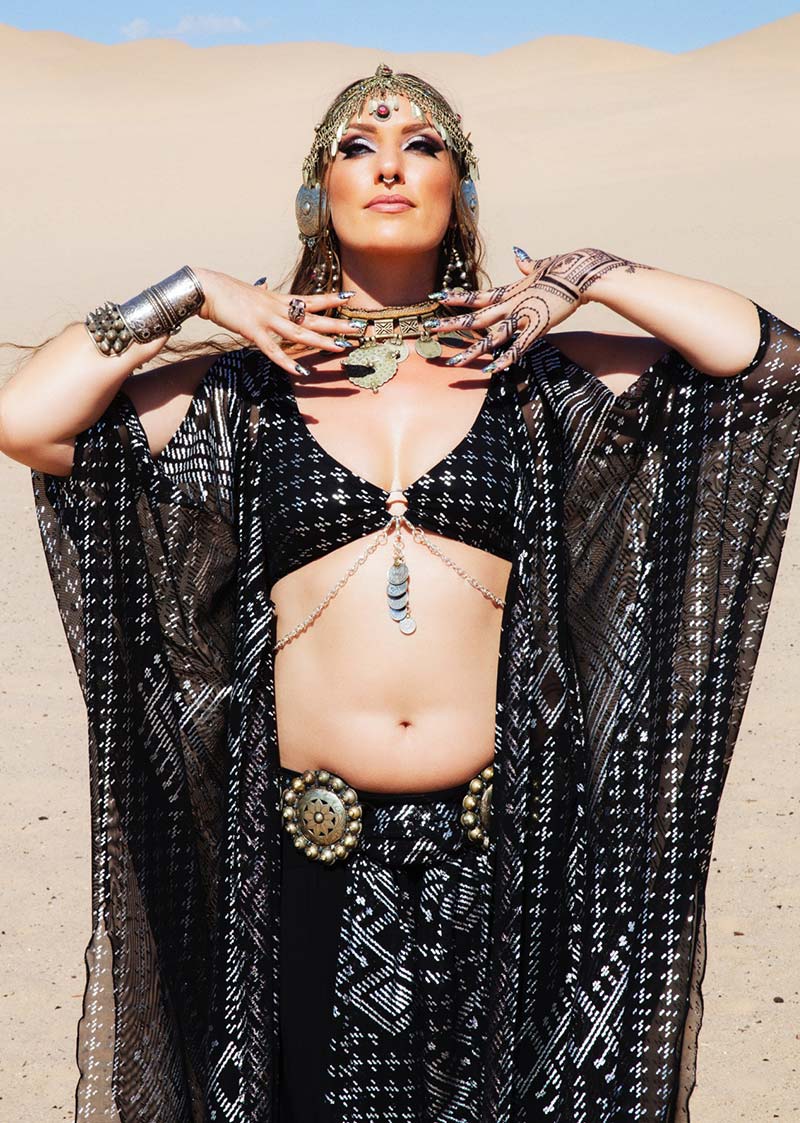 Tunic made with Assuit fabric

The processing method is very fascinating, as the figurative metal motifs are made with an embroidery technique that uses a special two-eyed needle, about 3 or 4 centimeters long and flatter than a normal needle. The two eyes are located next to each other at one end of the needle, and this allows a thin and flat piece of silver thread to pass through both holes without having to tie it. The needle and thread are then passed through the tulle fabric to form individual stitches. After performing each stitch, the thread is cut and a new stitch is started (it is not cut with scissors, but snapped by the artisan’s nimble fingers: in this way, the motifs are quickly formed on the upper part of the fabric). Every single stitch is wrapped around and through the mesh diagonally, the thread is cut and then hammered into position and passed through a roller, although some argue that the craftsman simply flattens each stitch with his fingers to fix it more firmly on the fabric , before continuing to the next step.

Silver threads are made and purchased at a mabsk (a blacksmith) and their current cost is around $ 150 per kilo of threads. In the past, only the wealthiest could afford an Assuit made with gold threads. Metal is an alloy and can vary in content, however high silver content Assuits become dull, and silver becomes dark, almost black over time, and it is impossible to polish. The golden-toned Assuits are made with metal wires containing brass. The fabric has great elasticity thanks to its perforated mesh, it is heavy and retains heat.

Modern tulle Assuits are coarser and stiffer today than antique pieces that are soft and elastic, this is because the holes in the soft tulle are very small and it takes much longer to pass the silver thread through the small holes than to the larger holes of rigid tulle. Most vintage Assuit fabrics are actually made of linen, a fiber that can be spun a little finer than cotton. Old tulle making machines spun a larger net than modern equipment, so the finer the thread and the larger the net, the older the canvas. 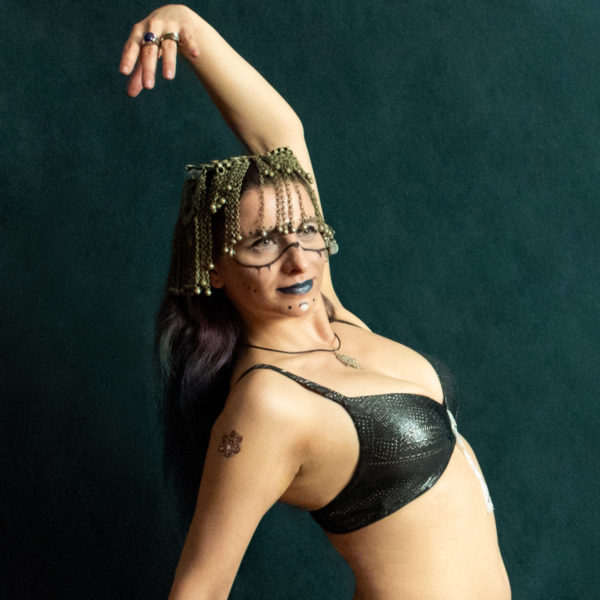 ASSUIT: FROM THE PHARAONS THROUGH THE AGES

Wire embroidery has been widely used throughout the Middle East, Asia and parts of Europe. According to some researchers, this type of metal embroidered fabric was made since the time of the Pharaohs, and it is no coincidence that we find references to its use as Egyptian linen in the Bible. In the Mont Bijoux Museum in Berlin, specimens of 3,000-year-old flax nets are preserved. The handmade net has an intricate design, and is made up of about 365 single fibers. The dyeing techniques used were equally sophisticated; metal salts to improve the solidity of the dyes were found in the fabrics in the tombs dating back to 1500 B.C. These first embroideries were made with the application of precious metals, in particular gold. The pure metal was beaten into thin plates, divided into small pieces which were rounded off by a hammer and then joined together to form the wire.

In the late 19th century, Orientalism was very popular and tourism in the Middle East grew: Assuit shawls were first mentioned in the 1870s. Merchants in the city of Asyut started making shawls using Turkish metal embroidery on pieces of mosquito nets, perhaps in imitation of these ancient fabrics. The Assuit began to appear in travel literature as some of the most desirable and distinctive objects that could be purchased in Egypt.

Furthermore, it was customary, in fact almost mandatory, that every bride in the Egyptian region of Saidi had a piece of tulle before her wedding, very often a galabeya (dress) and a tarha (a long and wide veil), which was generally given by the groom or purchased by the bride’s family.

These fabrics have also been used in old Egyptian musicals and in Hollywood productions such as Cecil B. De Mille’s Cleopatra (1934), and Samson and Dalila with Hedy Lamarr.

Shawls were also used to cover the piano and were extremely popular (some specimens are still found occasionally in antique stores). They are available in different sizes: most are long and narrow and the designs vary, ranging from simple to elaborate.

Some people believe that the designs have been passed down through families, as for the weaving and embroidery works. Some designs seem to intentionally be left incomplete. Coptic Christian designs often have animal and human figures, while Muslim shawls are based on geometric designs (although some dispel this myth). In some places, Assuit shawls are incorrectly referred to as Coptic shawls. Geometric designs were popular with the Art Deco movement from around 1925.

Most of the Assuits sold today are actually made in Suhag by women in small home embroidery “factories” and then resold in tourist shops in Cairo or abroad. Antique pieces are highly sought after and can cost a small fortune, while modern pieces are much easier to find and have a much more reasonable price. Shawls, bathrobes and even bedlah sets are made with this distinctive and expensive Egyptian fabric. 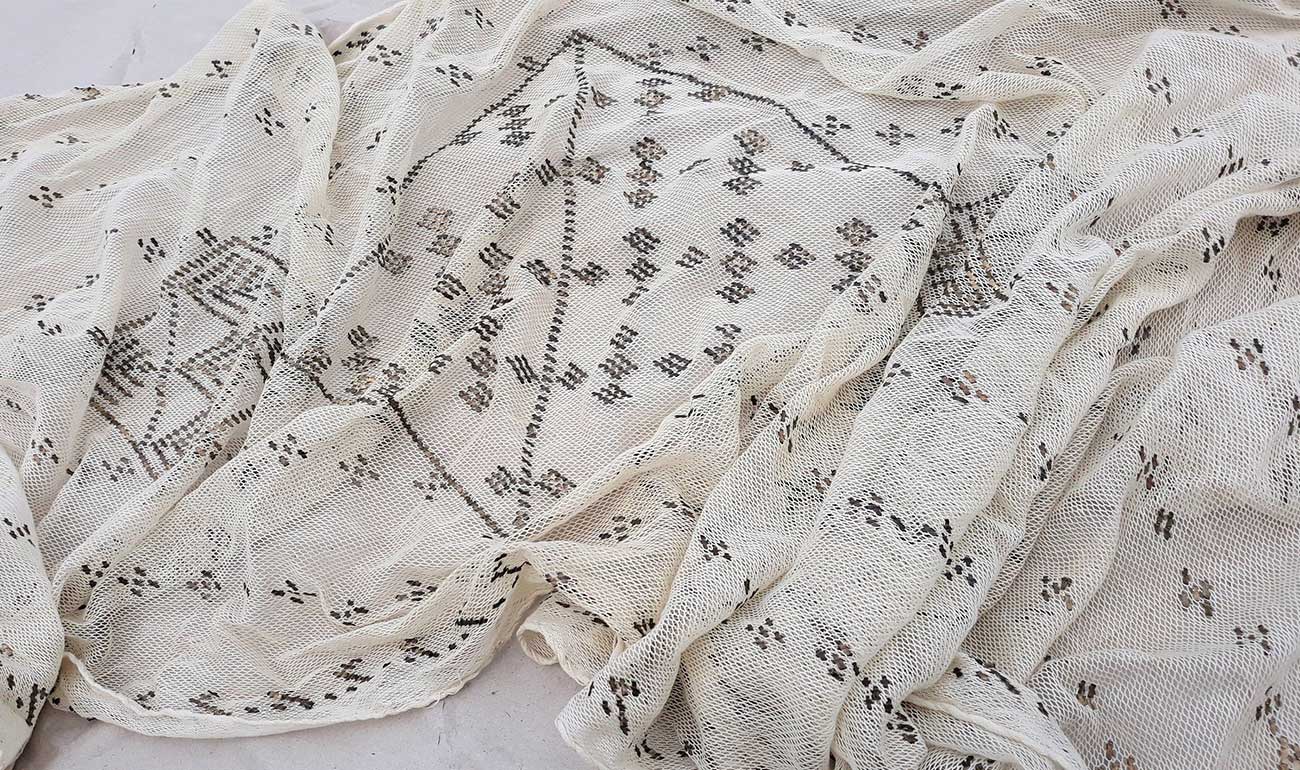 Fabric is made up of a cotton or linen net with small strips of metal that shine like liquid metal when they move.
Prev Next