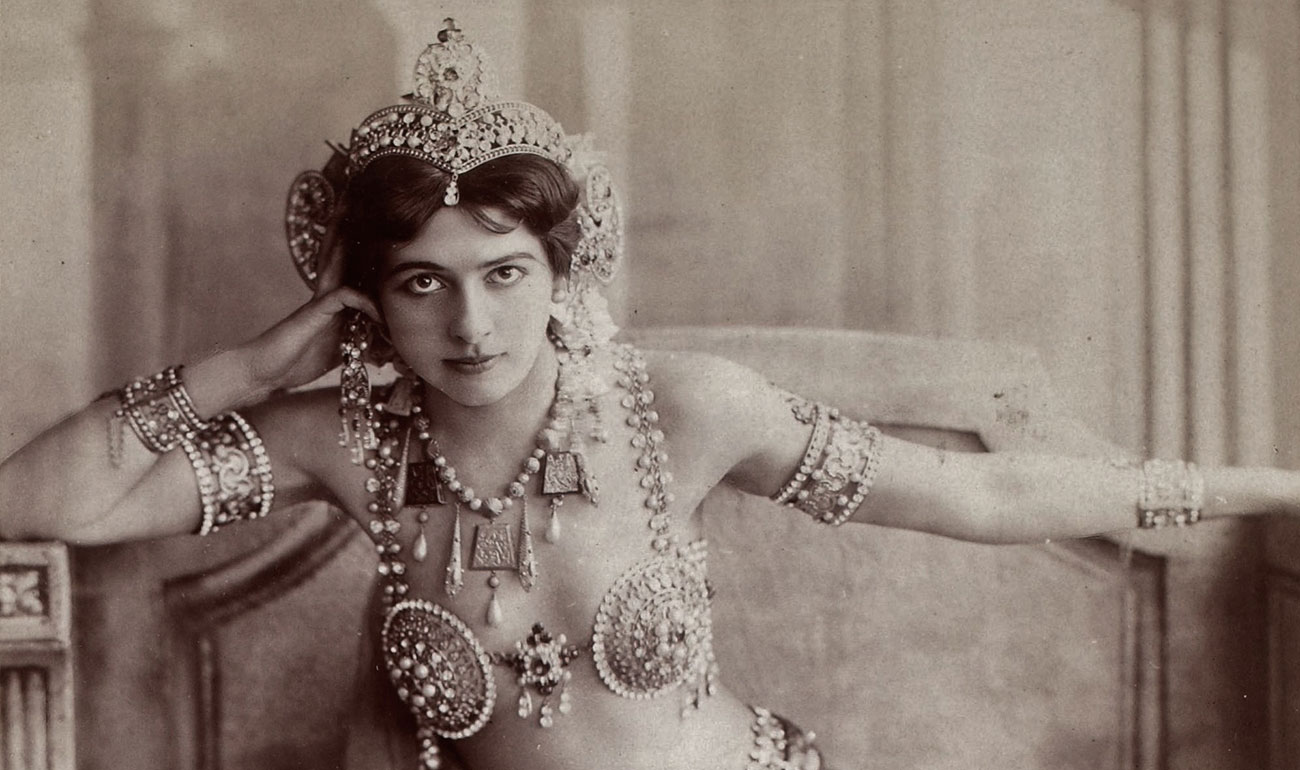 The dark charm of Mata Hari

Known for her dark beauty and sensual performances, Mata Hari breaks the norms of the twentieth century by triumphing as an exotic dancer inspired by oriental dances. She dances naked, has several lovers and flaunts her wealth. All things that could have proved fatal for the dancer, executed as a spy in 1917. 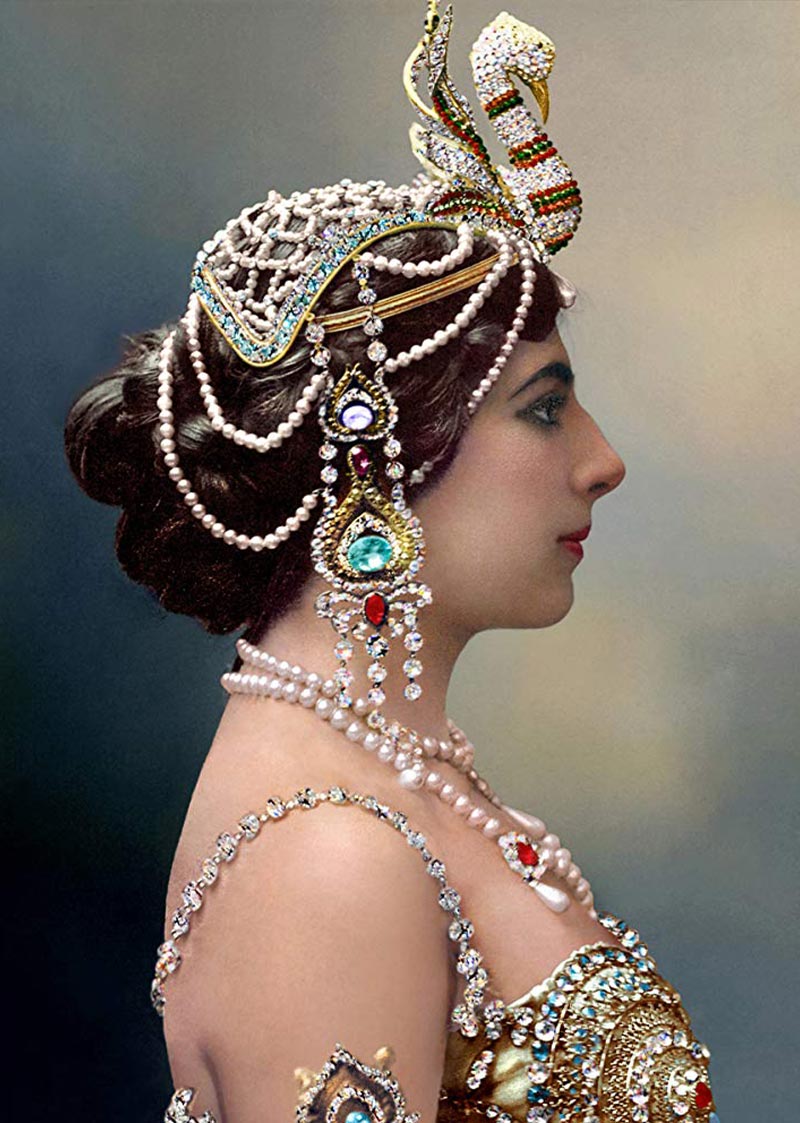 THE ORCHID IN A LION TEETH FIELD

Margaretha Geertruida Zelle was born in 1876 into a wealthy family in the north of the Netherlands. Brave, brilliant, gifted for languages and with an exotic appearance that stands out between the light skin and blonde hair of other Dutch children. She has deep, large and hypnotic eyes, and long raven-colored hair, so much so that a school friend once compared her to “an orchid in a field of dandelions”. Her father soon leaves the family for another woman, while her mother dies a few years later: Margaretha is 14, is spoiled and sexually precocious, so she is sent to a school to become a teacher, but she is expelled a couple of years after having had an affair with the principal. 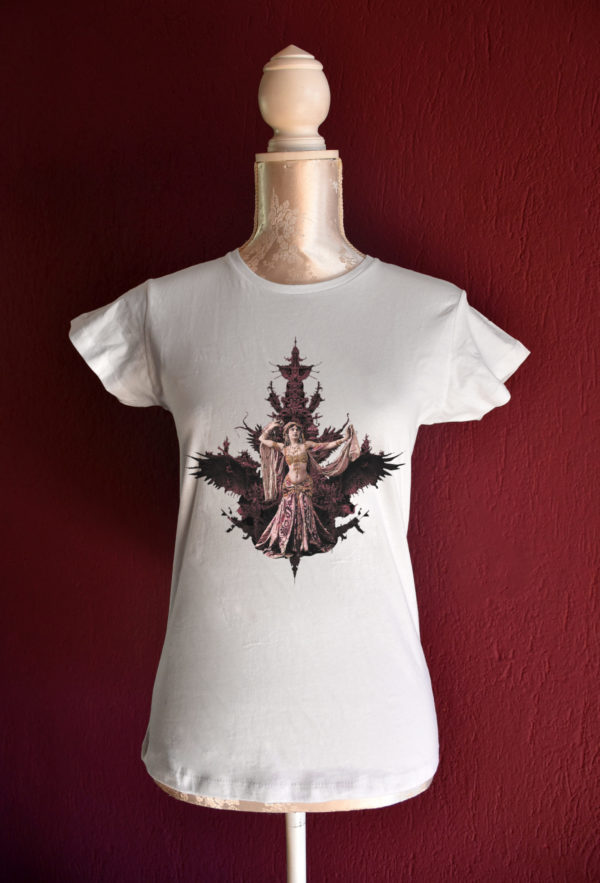 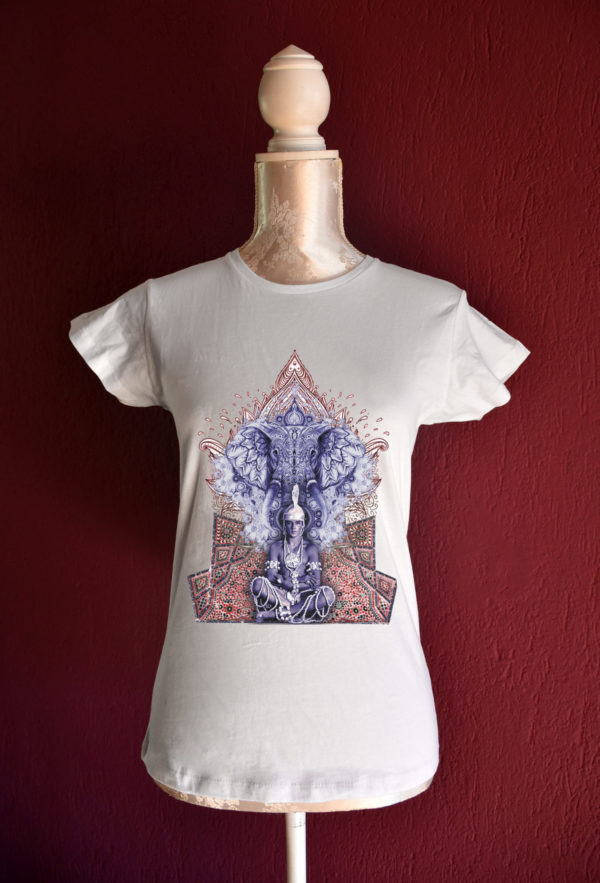 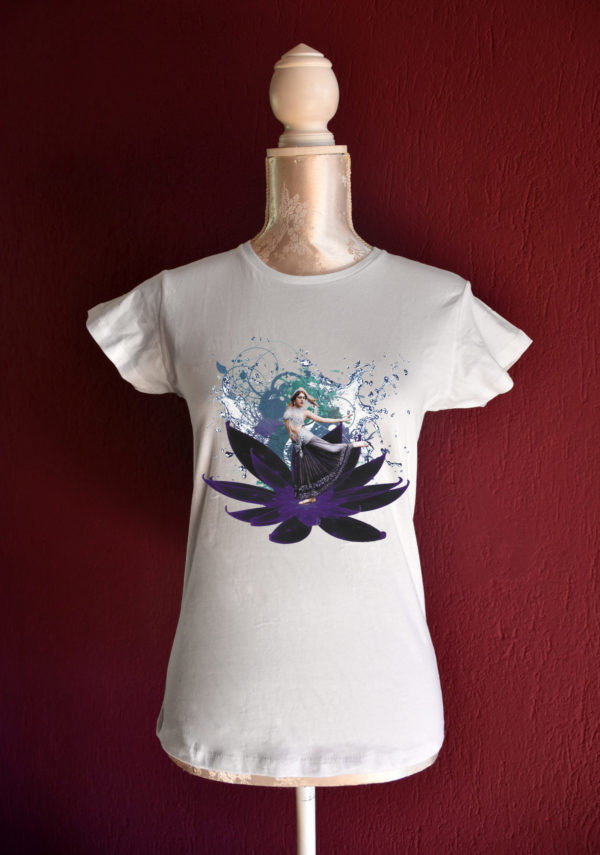 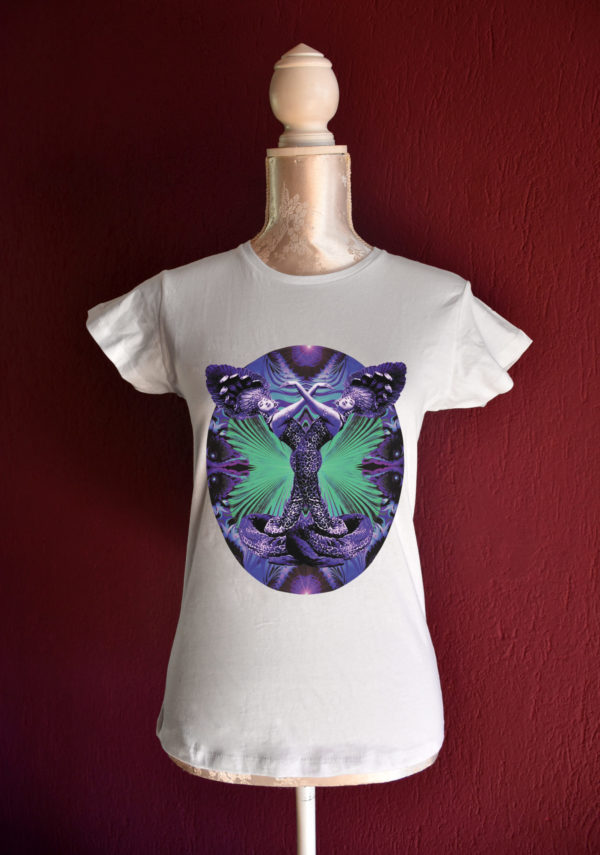 At 18, bored, unhappy and eager for adventures, she responds to an announcement in a newspaper published by an officer, a certain captain Rudolph MacLeod, who wanted to know and marry “a lovable girl”…but, as he would have said in an interview later, Margaretha actually wanted to “live like a butterfly in the sun“. After the wedding, the two move to the island of Sumatra, in the Dutch East Indies, today’s Indonesia. But things turned out to be different from how the girl expects: her husband is twenty years older than her, little money, many debts and a good number of extramarital affairs. Louise Jeanne was born in 1898, but the relationship did not improve. Margaretha’s melancholy and sadness are exacerbated by the loss of one of the first-born Norman, who dies suddenly, probably poisoned. Her husband asks to be transferred to the neighboring island of Java, but despite efforts to recover from mourning, life continues to be unbearable, and the spouses no longer even bother to hide mutual hatred.

One evening she is invited by a local gentleman to attend a traditional dance show, and it is a revelation for her: the elegance and sinuosity of the movements of the indigenous dancers enchant Margaretha who literally feels overwhelmed by the pathos of the movements and the rhythm with which the bodies of the Javanese dancers twist.

In 1902 they returned to the Netherlands. That same year, separation followed, then divorce. Louise Jeanne, initially entrusted to her mother, was eventually raised by her father. 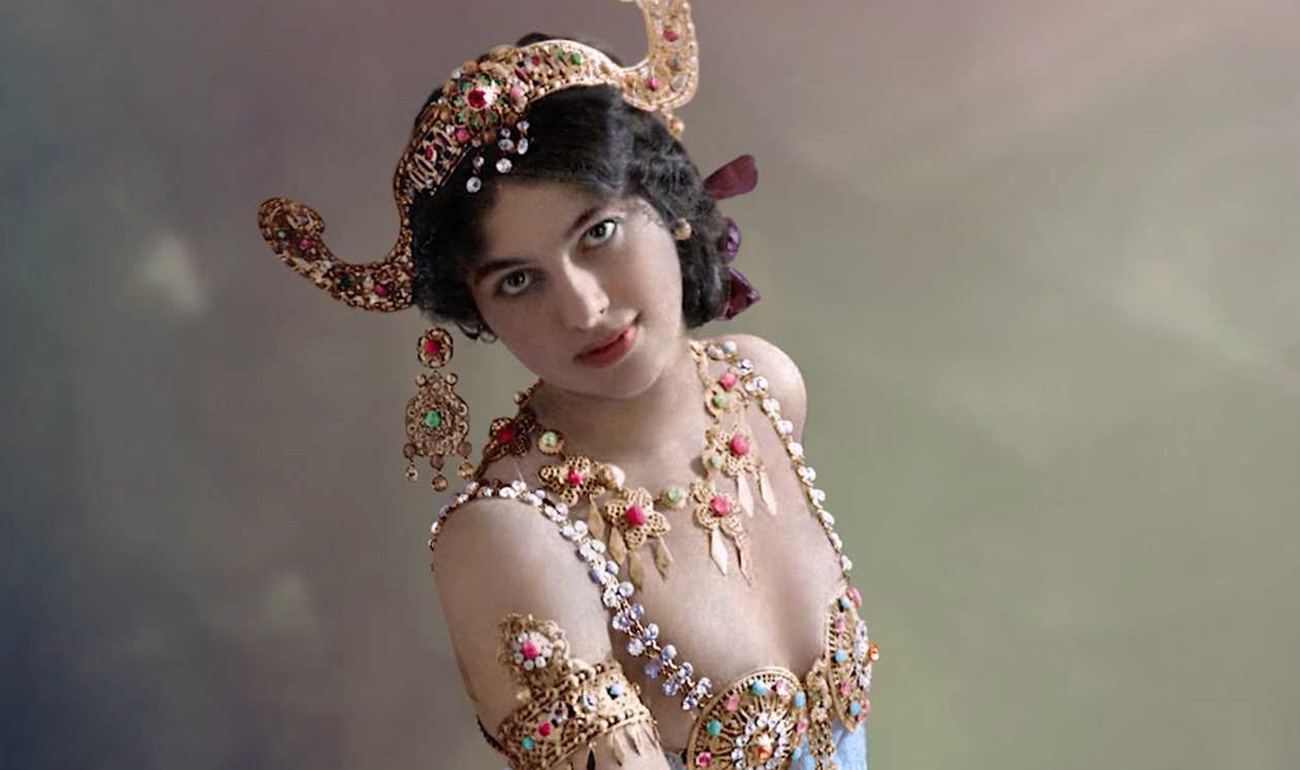 «My dance is a sacred poem...»
Mata Hari

SUNRISE OF THE EYE OF THE SUN

Marked by travel and suffering, Margaretha knows how to reinvent herself in a new and surprising way, and in March 1903 she decides to move to Paris. It is the period of the Belle Époque, in cafes and night clubs men and women are constantly looking for fun, light-heartedness, champagne. Margaretha senses that she can find her luck in theaters and bars in Paris. However, the beginning is not simple: without a penny in her pocket she is forced to do chores as a model, some shows in third-rate theaters, probably even prostitute herself.

In 1905 she appeared on the Parisian scene as an exotic dancer with the name of Mata Hari, which in Malay means “sunrise” or “eye of the sun” – and performed at an oriental art center, the Guimet Museum. The guests are 600 representatives of the capital’s economic elite. Dressed in a transparent dress, a bra studded with precious stones and a charming headdress, she performed absolutely new dances.

At the beginning of each show he announces that these are sacred dances learned in Indian temples, and he explains: «My dance is a sacred poem […] We must always transmit the three stages that correspond to the divine attributes of Brahma, Vishnu and Shiva: creation, fruitfulness and destruction». Through the dance Mata Hari tells stories of lust, jealousy, passion and revenge, meeting the fantasy, naive and cloudy, built on realities of completely unknown countries. Mata Hari offers viewers what they expected from her dance: the forbidden charm of eroticism and the purity of asceticism, in an absurd syncretism in which the mild wisdom of a Buddha was equated to the bloodthirsty rites – however non-existent – of terrible Hindu goddesses. All of Paris speaks of the bewitching and mysterious woman who says she comes from remote parts of the east of the world. On the other hand, Margaretha Gertruida Zelle no longer exists and Mata Hari can build her past by enriching it with anecdotes and nuances that make it intriguing to the curious ears of wealthy businessmen and their bored wives.

In a short time, the dancer performed on the most prestigious stages in Paris: from the Trocadero to the Café des Nationes, from the Olympia to the Moulin Rouge. Mata Hari’s fame also came abroad and in 1906 a tour was organized in Spain which was a real triumph. She is defined the “woman who is the dance herself”, the “sublime artist”, the one who “manages to give the deepest and most poignant sense of the Indian soul”, is on the front pages of all of Europe and is desired by richer men of the West. Mata Hari lives thanks to the benefit of her lovers, especially a banker, a colonel of the Dutch hussars, a major of the Belgian army and a captain of the Russian air force.

THE DARK CHARM OF THE SPY

But the beautiful and intense life of Mata Hari undergoes a sharp change with the outbreak of the First World War. Mata Hari continues to travel a lot and, therefore, the world of counterintelligence puts her eyes on her. Like any self-respecting war, not only soldiers and weapons come into play, but also more subtle tools such as espionage and secret plots. But it takes more than brains that decipher messages and spies who lurk. It takes a seductive and subtle weapon, someone who knows how to steal the most hidden secrets by operating on people’s living hearts. Who better than a woman then? And who better than Mata Hari, the woman par excellence, the one to whom all men fall on their feet? Secret war instills the torment of insecurity, of an enemy who sees everything. Fragile, blackmailing, charming, lover of the good life, confidant of many officers not inclined to the life of barracks, Mata Hari is the ideal character for a double game between France and Germany, hired simultaneously by the two secret services.

The game of espionage and counter-espionage, you know, is difficult to manage and even if working for two bosses means having a double pay the stakes are too high. The eyes of the secret services of three countries are focused on her: the Deuxième Bureau in Paris, the first to become suspicious and stalk her, the Abteilung IIIb in Berlin and finally the Secret Intelligence Service in London. The Germans are the first to have evidence of his betrayal and they want the French to find out too, so as to eliminate it.

Mata Hari is indicted for eight charges: the charges against her were vague and there is no reference to specific secrets that would have been passed on to the enemy, however various evidence of her “immoral” lifestyle was presented.

Declared guilty of all the charges, Mata Hari was sentenced to death by shooting. Attempts to commute the execution to a prison sentence are rejected, as well as requests for pardon. The sentence is carried out on 15 October 1917, in the early morning, in secret. Nobody claims the body, which is then buried in a mass grave. The head is preserved, then stolen in the 1950s in circumstances never clarified, to perhaps serve as an extreme and macabre relic.